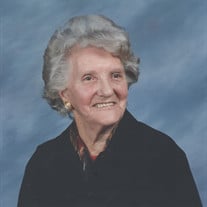 Bea Crow, a longtime resident of Mentone, passed away peacefully in her sleep on July 18, 2018, at the age of 101. Originally Beatrice Kerby, she was born October 18, 1916, the third of six children on a farm near Ider in DeKalb County. From early on, Bea was a force to be reckoned with, in part because of her quick wit and her solid determination. In her early teens, Bea was plowing the family garden behind a mule when a woman stopped to ask for directions. That woman was Martha Berry, founder of Berry College in Rome, Georgia. Ms. Berry saw a spark in Bea and personally invited Bea to come live in her home and attend school. Her time at Berry, helping in Ms. Berry’s home, taking classes, and meeting influential people, like Model T inventor Henry Ford, helped mold her into the person she would become. She often talked about her time at Berry fondly and loved to share her memories with all who would listen. At the age of 19, Bea went to work at Alpine Camp and would go on to feed hungry campers and counselors three times a day for over six decades. It was at Alpine that she met her husband Leonard, who sold fresh vegetables to the camp. After she and Leonard married they moved to Baltimore, Maryland, where Leonard served his country in the Navy and Bea worked for the family who owned Procter & Gamble. Bea and Leonard eventually moved back to the Alpine Community of Mentone on Lookout Mountain where they lived the rest of their lives. Bea lived her life to the fullest and very seldom slowed down. While working at Alpine during the summers, she also found time to run the largest commercial egg operation in DeKalb county, rear her five children, and entertain and feed her community. Bea knew only how to work hard; there was not a garden she could not cultivate, a snake she would not chase away, a meal she refused to cook (always cooking by feel or taste- she thought recipes were unnecessary), or a visitor she would not welcome. But as hardworking as Bea was, she was just as selfless. Her joy was entertaining guests; believing that life only happened around a table and you are happier when you’re fed-whether you want to be or not. For those fortunate enough to dine at Bea’s table, it was easy to see that her gift was food. She excelled at cooking, serving, and, of course, eating - mostly sweets (Bea would often start with dessert first). Bea is preceded in death by her loving husband Leonard Crow, daughter Mary Ann (Crow) Smith, and granddaughter Pam Collins. She is survived by four children: Gail Collins, Bob (Cathie), Gary (Cathy), and Karen Tate (Pat), 10 grandchildren, and 25 great-grandchildren. A celebration of Bea’s life will be held at 2 pm on Sunday, July 22, at Wilson Funeral Home in Fort Payne, AL, with Dr. R. Pat McFadden officiating. Visitation will be Saturday, July 21, from 4 pm to 8 pm at Wilson Funeral Home in Fort Payne.

Bea Crow, a longtime resident of Mentone, passed away peacefully in her sleep on July 18, 2018, at the age of 101. Originally Beatrice Kerby, she was born October 18, 1916, the third of six children on a farm near Ider in DeKalb County. From... View Obituary & Service Information

The family of Bea Crow created this Life Tributes page to make it easy to share your memories.

Bea Crow, a longtime resident of Mentone, passed away peacefully...

Send flowers to the Crow family.