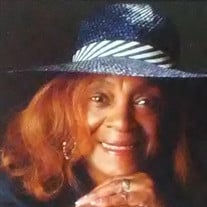 Bera Lee Bell was born on August 30, 1937 in Meridian, Mississippi, to the late Louvenia Marshall Henderson and Robert Lee Henderson, Sr. Bera was the eldest of fourteen children. Seven of her siblings preceded her in death: three brothers; Richard Henderson, Robert Lee Henderson, Jr. and Michael Henderson, and four sisters; Gloria Dean Morris, Naomi Ford, Corrine Little and Lavera Sims. She has six surviving siblings; two brothers, Larry Lamar Henderson (Eliza) and Avery Glenn Henderson and four sisters; Ada Ree Hopson, Joyce Faye Hudson, Deidre Houston (Louis), and Cynthia Battle (Augustine). Bera Lee Henderson graduated from T.J. Harris High School in 1956 and was the first of her siblings to receive a high school diploma. Before graduation, at the age of 17, Bera took the train by herself to Colorado Springs, Colorado on a quest to marry her beloved Spencer James Bell (Billy), who preceded her in death (1993). They were married on July 7, 1955, while Spencer was stationed with the Armed Services. To this union four children were born, three daughters and one son; William Anthony Bell (Little Billy) preceded her in death (1994). Bera was a Queen in her own world. She was the Belle of the Ball and the songbird. Always very meticulous and stylish, from her hairstyles to her clothing attire; Bera made sure she was matched from the crown of her head to the shoes on her feet. Mother Bell, as many affectionately referred to her, was a magnificent mother, wife, house keeper, cook, baker, teacher, business assistant to her husband, and friend to many. She started singing on the radio at the young age of 16 years old. In 1958, while Bera and Billy were in Meridian, Mississippi, they decided to take a leap of faith and moved to Chicago, Illinois. Bera started her Christian education at an early age at a Baptist Church while still living in Meridian. Upon moving to Chicago in the early 1960’s, she changed her membership to Mt. Zion A.M.E. Church. In 1974, Bera later joined Robinson Chapel A.M.E. Church, under the leadership of the founder Paul E. Turner. Bera held many offices during her membership at Robinson; she served on the Steward Board, was Sunday School Superintendent, President of the Missionary Society, and President of the Choir, which was initiated at Robinson Chapel. Also, while at Robinson, Bera organized and managed a Soup Kitchen to address the need of the community. She was the later honored for her service and dedication to Robinson Chapel and the Kingdom of God. Her job and missionary did not stop, as she continuously helped the children and families within her neighborhood as well. Bera served as President of the 7700 Crandon Block Club. Her commitment extended also for her children as she was an active member of Chicago Public School’s (CPS) Parent Teacher Association (PTA). Her presence and commitment influenced the school to put her on their payroll. Bera also put on her political hat serving as an Election Judge. Bera has touched the lives of so many, leaving each of us with loving memories. She leaved to cherish three daughters: Nena Fellger (Albert), Karen Winona Bell, and Jemerial Bell (Mentone, AL); one special daughter, Dorothy Brown of Meridian, MS; five grandchildren, Michael Bell (preceded in death) IL, Marcus, Loria Vaughn, Tora Brown (Meridian, MS), and Brandon Brown (GA); great granddaughters, Kairi Rain Bell Knight, Keira Deseree Bell (preceded in death). A Celebration of Life service will be held at 1 p.m., Saturday, August 8, 2020 at the Wilson Funeral Home Chapel with Rev. Jamie Bailey officiating. Burial will follow in the Bankhead Cemetery. The family will receive friends on Saturday from 12 noon until the 1 p.m. hour of service. Wilson Funeral Home and Crematory of Fort Payne is in charge of arrangements.

Bera Lee Bell was born on August 30, 1937 in Meridian, Mississippi, to the late Louvenia Marshall Henderson and Robert Lee Henderson, Sr. Bera was the eldest of fourteen children. Seven of her siblings preceded her in death: three brothers;... View Obituary & Service Information

The family of Bera Lee Bell created this Life Tributes page to make it easy to share your memories.

Send flowers to the Bell family.