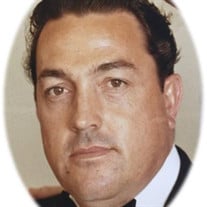 Billy J. McMinn, 84, of Atlanta, GA, formerly of Fort Payne, passed away January 15, 2019. Mr. McMinn was born on February 5, 1934 through the union of his parents, Clyde Holbert and Willie Louise Payne, in Elon (Clouds Cove), Madison County, Alabama. He lived in Fort Payne, Alabama during his childhood and young adulthood before settling in the suburbs of Atlanta, Georgia in 1963. He worked in the residential and commercial building industry for the duration of his career and retired at the young age of 75. His interests included music and hunting. He was an accomplished steel guitar player and performed professionally throughout his younger years and owned/operated an Atlanta Country Music nightclub in the sixties. He was also an avid hunter and raised championship dog breeds. Memorial services will be 1:30pm Saturday, May 11, 2019 at Wilson Funeral Home Chapel. The family will receive friends on Saturday beginning at 1:00pm until the hour of service. The family is requesting no flowers, but memorial contributions may be made to the American Kidney Fund, 11921 Rockville Place, Suite 300, Rockville, MD 20852 He leaves to cherish his memory: two daughters, Donna McMinn and Debbie McMinn; a son, Joseph McMinn; a grandchild, Tracey Stewart (Kris); and two great-grandchildren, Kristopher and Kylie Stewart. He is also survived by brothers, Gilbert McMinn (Ruth) and Wayne McMinn; sisters, Carrie Bible, Margaret Wright (Billy) and Janice Ingle. He is preceded in death by his parents and brother Clyde.

The family of Billy J McMinn created this Life Tributes page to make it easy to share your memories.

Send flowers to the McMinn family.