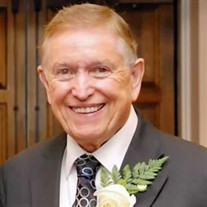 Dr. Charles Alexander Isbell of Fort Payne died peacefully of natural causes on Sunday, December 27 at his residence, Harborchase of Huntsville. He had celebrated a wonderful Christmas day with activities, including leading a carol sing-along. Charles was born in Fort Payne, Alabama on August 28, 1933 to Eleanor Gilbreath Isbell and John B. Isbell, Jr. He was married to Barbara Hulgan Isbell for 63 years until her death in 2018. He is survived by their children, Karen (David) Ivey, Laura Patterson, and Chuck Isbell; grandchildren, Allison (David) Whitener and great-granddaughter Grace; Richard (Kelsey) Ivey and great-grandchildren Everett and Meredith; Stuart (Courtney) Ivey and great-grandchildren Vivian and Duncan; Trey Patterson; Tripp Isbell; Annalee Isbell; sister, Sara (John) Quinn; and a host of extended family and friends. Charles lived most of his life in his beloved Fort Payne, which he called “heaven on earth.” He graduated from DeKalb County High school (1951), Alabama Polytechnic Institute School of Pharmacy (1955), and the Medical College of Alabama (1962). Following his graduation from Auburn, he served as a pharmacy officer at Brooke Army Hospital in San Antonio and at Valley Forge Army Hospital. While stationed in Pennsylvania, with encouragement from his brother John B, he decided on a career in medicine. He always said it was one of his best decisions. After Charles finished his residency in Pediatrics at Lloyd Noland Hospital in Birmingham, he returned to Fort Payne with his family to practice with John B at Isbell Clinic. He held both medical and pharmaceutical licenses active for over 50 years. As a pediatrician, he delivered more than 3,000 babies while covering the obstetric service for John B on his days off. He lovingly took care of the children and families of DeKalb County with skill, compassion, humor, and an impeccable work ethic, having never missed a day of work in more than 30 years of practice. He was devoted to his patients, co-workers, and the community. Charles was born at home in the center of town where the First Baptist Church educational building now stands. He often told of hearing sermons through the open window as a baby. He was a lifelong and faithful member who was steadfast in his support of First Baptist, a devoted Sunday school teacher, and active deacon. He and Barbara were members of the Golden Circle. Known to most as Dr. Charles, to his children and grandchildren he was Dad and Granddad, and he was larger than life to them. He loved and cared for them fiercely, supported and encouraged their endeavors, and always knew what to do and how to do it. His sense of humor and quick wit is legendary. Gifted with an infectious smile and keen appreciation for a good joke, he kept everyone laughing and entertained and was a popular emcee at community events. In addition to spending time with Barbara and his family, Charles enjoyed daily workouts at Sports First Fitness, line dancing, a competitive game of ping pong, everything about cars, farming, playing his harmonica, and being silly with kids. He was a teacher and mentor who gave so much back to his community and was loved by all who knew him. In recent years, Charles continued his legacy of caregiving and helping others at his Harborchase community. He assisted with activities, entertained residents and guests, and led exercise class and worship services. Special thanks to his caregivers and the staff of Harborchase for their love and care of Charles and Barbara. Due to the Covid-19 pandemic there will be a private graveside service for immediate family. A memorial service to celebrate the life of Dr. Charles will be announced at a later date. In lieu of flowers, memorial donations may be made to First Baptist Church Fort Payne, Landmarks of DeKalb County, or the DeKalb County Children’s Advocacy Center.

Dr. Charles Alexander Isbell of Fort Payne died peacefully of natural causes on Sunday, December 27 at his residence, Harborchase of Huntsville. He had celebrated a wonderful Christmas day with activities, including leading a carol sing-along.... View Obituary & Service Information

The family of Dr. Charles Alexander Isbell created this Life Tributes page to make it easy to share your memories.

Send flowers to the Isbell family.