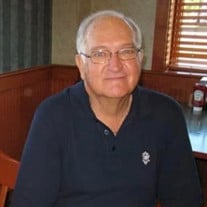 Donnie Mac Myers, age 80 of Collinsville, passed away Tuesday afternoon at his home. Mr. Myers was born on October 28, 1941 in Collinsville to the late Fred & Margaret Wade Myers. Mr. Myers was a retired educator for the DeKalb County Board of Education where he spent the majority of his career at Collinsville High School as a teacher, counselor and coach. He taught night classes at Snead State Junior College for a short time and spent the last 8 years of his career at the Dekalb County School of Technology as the Coordinator for the Job Placement Program. Donnie had a love for all sports and had an instrumental part in the Dekalb County Sports Hall of Fame. Mr. Myers only missed one Alabama High School State Basketball Tournament from the late 60’s until 2018. After retirement, he enjoyed playing golf. He was a Deacon at Collinsville Baptist Church. Funeral services will be 3 p.m., Saturday, June 25, 2022 at the Collinsville Baptist Church with Rev. John Morgan officiating. Burial will follow in the Collinsville Cemetery. The family will receive friends on Saturday from 1pm until the 3pm hour of service. The family is accepting flowers or memorial contributions may be made to the Collinsville Baptist Church in Donnie’s memory. Pallbearers will be Cameron Mackey, Chandler Mackey, Mason McKinney, Branson Foster, Kyle Siniard, Kevin Siniard, Will Hunt, Hank Harbour, Jake Dickie, and Cameron McKinney. He is survived by his wife of nearly 57 years, Margaret Myers; daughters & sons-in-law, Stacey & Lance Mackey and Allison & Justin Foster; sister, Gloria Wright; grandchildren, Cameron Mackey, Chandler (Tori) Mackey, Gracie Foster, Mason McKinney, and Branson Foster; great-grandson, Nash Mackey; sister-in-law, JoAnn Myers; several nieces, nephews, and cousins. He was preceded in death by his parents; and brother, Jackie Myers.

Donnie Mac Myers, age 80 of Collinsville, passed away Tuesday afternoon at his home. Mr. Myers was born on October 28, 1941 in Collinsville to the late Fred & Margaret Wade Myers. Mr. Myers was a retired educator for the DeKalb County Board... View Obituary & Service Information

The family of Donnie Mac Myers created this Life Tributes page to make it easy to share your memories.

Send flowers to the Myers family.