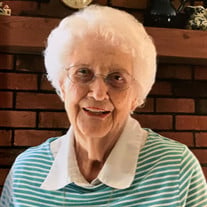 Eleanor Bailey Robinson, age 97, of Fort Payne, Alabama, passed away December 31, 2020. Eleanor was born October 19, 1923 to Reverend Thomas Marvin and Ruth Junior Bailey. She was preceded in death by her parents, her husband Fred D. (Rob) Robinson, her brothers Bill and Lowe Bailey; her sisters-in-law, Mrs. Bill (Marie) Bailey, Amliee Hendrix, Ethelene Hamrick, Nell Waldrop; Mildred, Willie, and Jeri Robinson; brothers-in-law, Kermit, Ardith, Elwin, Don, and Tommy Robinson, Brock Hendrix, and George Hamrick and niece Sharon Robinson Fuller. She is survived by her son, Thomas Arthur Robinson II and his wife, Mary Alice Robinson, of Hoover, AL.; brother-in-law Reverend Guy Waldrop, of Lexington, Kentucky; sisters-in-law, Sue Robinson, of Cullman, AL and Dee Dee Baily of Titus, AL and many nieces and nephews. She was born in Cullman, Alabama and graduated from Cullman County High School in 1942. She attended Auburn University and graduated from West Virginia Wesleyan in 1945. She taught Chemistry at Sneed State Junior College in Boaz, Alabama. She then became the head dietician at Cullman Hospital in Cullman, Alabama. In 1949, she married and moved to Centre, Alabama, where she taught Chemistry at Cherokee County High School. She then moved to Florence, Alabama and worked in administration office at Florence State Teachers College, which is now the University of North Alabama. In 1953, she moved to Tuscumbia, Alabama and started working for the Welfare Department which is now the Department of Pensions and Securities. She returned to teaching elementary students in 1960, in the Tuscumbia City School system. In 1963 she moved to Fort Payne, Alabama and began teaching 5th grade at Williams Avenue school. She became well known for her 5th grade student stories. While in Fort Payne, she again served her Lord and Community. She was a member of Fort Payne First United Methodist Church, where she served as the Church Historian. As the Historian, she was instrumental in obtaining pictures of the previous pastors of Fort Payne United Methodist Church. She was also a member of the Aferine Driskell Sunday School Class, the United Methodist Women, and the Church Circle Group. She was also a supporter and volunteer for the Train Depot Museum and a Charter Member of the Landmarks Society in Fort Payne, Alabama. She was a voracious reader, loved working crossword puzzles, in ink, and was a member of several Bridge Clubs. A private graveside service was held on Monday, January 4, 2021. A Celebration of Life Service will be held, at a later date. In lieu of flowers, the family request memorial gifts may be made to the Christian Life Center at Fort Payne First United Methodist Church, 206 Grand Avenue NW, Fort Payne, AL 35967.

The family of Eleanor Bailey Robinson created this Life Tributes page to make it easy to share your memories.

Send flowers to the Robinson family.