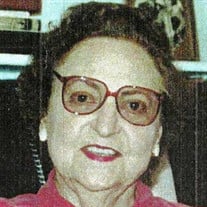 Elizabeth (Lib) Simmons Howard, local historian and writer, died on October 29, 2020 at the age of 94. She was a long-time resident of Fort Payne and lived for the past year at Crossville Health & Rehabilitation. Lib graduated from Gaston... View Obituary & Service Information

The family of Lib Howard created this Life Tributes page to make it easy to share your memories.

Send flowers to the Howard family.