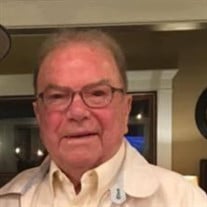 James Randall Coker, Sr., 94, of Collinsville, passed away Monday, November 1, 2021. He was born December 18, 1926 in Collinsville, Alabama to the late Charles and Mable Keener Coker. He was a 1947 graduate of Collinsville High School and... View Obituary & Service Information

The family of James Randall Coker Sr. created this Life Tributes page to make it easy to share your memories.

Send flowers to the Coker family.