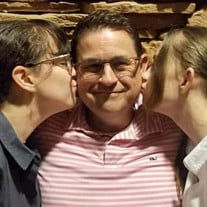 Jason Charles Brandt, 49, of Omaha, Nebraska, passed away peacefully at his home on Friday, January 28, 2022, after a short, but hard-fought, battle with bile duct cancer. Jason was born in Syracuse, Nebraska, on October 12, 1972, to proud... View Obituary & Service Information

The family of Jason Brandt created this Life Tributes page to make it easy to share your memories.

Send flowers to the Brandt family.