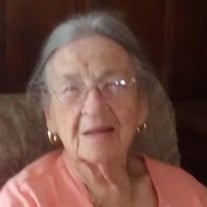 Jessie Beatrice “Bee” Swader Malone, 101, of Fort Payne, died peacefully on Monday, April 2, 2018 at Dekalb Regional. She is survived by her three daughters Kay (Bill) Stringer of Laurens, South Carolina; Ann Malone Henderson of Cloudland, Georgia; and Susan Lynn Malone of Fort Payne; three grandchildren Shannon (Christopher) Campagna; Oliver (Abby Mitchell) Henderson; and Halle Henderson; and two great-granddaughters Liza Banks and Bea Campagna. Bee was born on March 30, 1917 in the High Point community on Sand Mountain in Dekalb County, to Robert Breckenridge and Addie Hutcherson Swader. She grew up on her parents' farm and attended school in High Point and Valley Head, graduating from Valley Head High School in 1937. Bee was working at J.C. Penney when she first met Marvin E. Malone, Jr., who worked in the shoe department there. They married and settled in Fort Payne, where Marvin first worked for Southland Sox, Inc., and later with Bee’s help, ran Malone Mills, a hosiery finishing mill, for many years. The Women of the Church at First Presbyterian Church honored Bee with a lifetime membership for her active role there over many decades. She was also a member of the Fort Payne Homemakers Club for many years. Bee is remembered by many in the church and far beyond for her love of gardening, cooking, and sewing, setting and maintaining a standard of excellence in all three into her mid-nineties. Taking after her beloved Grandpa Swader, she took pride in her right to vote, casting her ballot in every single Presidential election since the legal voting age (of 21 back then) until her death. She was one of the oldest registered voters in Dekalb County. Bee was preceded in death by her dear husband of 57 years, Marvin Edward Malone, Jr.; her brother R.B. Swader; and her parents Robert and Addie. Funeral service will be 3:00 pm, Friday, April 6, 2018 at the First Presbyterian Church in Fort Payne with Revs. Tom and Theresa Martin officiating. Burial will follow in the Glenwood Cemetery. The family will receive friends on Friday from 1:00pm until the hour of service at First Presbyterian Church. The family is accepting flowers, or memorial donations can be made to the First Presbyterian Church of Fort Payne. Wilson Funeral Home & Crematory is in charge of arrangments.

The family of Jesse Beatrice Malone created this Life Tributes page to make it easy to share your memories.

Send flowers to the Malone family.