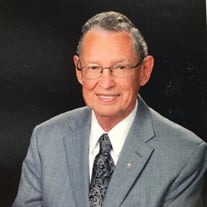 Dr. John B. Isbell, 89, of Fort Payne died at his home Friday, May 15, 2020, with his family present. Born March 24, 1931, to John B. and Eleanor Gilbreath Isbell, he attended Fort Payne City School and was a graduate of DeKalb County High School Class of 1949, Auburn University Class of 1954, and Medical College of Alabama Class of 1959. After serving an internship at Lloyd Noland Hospital, he returned with his family to Fort Payne in 1960, founding Isbell Clinic, and practicing General Medicine and later limiting to Obstetrics and Gynecology until his retirement in 1995. He was a Veteran of the Korean War, serving as a medic and ambulance driver from December 1950 until January 1952. He remained a member of VFW until his death. Known as “Dr. John” to most who knew him, he was known for his love and support of his family, his church, his work and coworkers, and flying airplanes. Without exception, he was an encourager of the best sort, and a lover of learning, affecting his own children and many others to pursue excellence in all things. Delivering somewhere around ten thousand babies over his career, he made a connection to most households in the area. Many of those children later were his “copilots” in his beloved Aeronca airplane as he and his airport friends gave rides to encourage interest in flying through the Young Eagles program. Dr. John excelled in obstetrics, but since childhood had interest in almost anything mechanical. With his family, he managed to build from scratch a car, boat, and airplane, unselfishly sharing rides with any who wished, and always eager to share his enthusiasm and knowledge about such, particularly with his grandchildren, whom he adored, and presented with such challenges as conjugating verbs in multiple foreign languages. He was an active member of First Baptist Church, serving as a Deacon, Youth and Adult Sunday School teacher, choir member, and able mentor to many, with a kind and often humorous word to all. Even after his hearing and vision largely failed him, he was faithful and eager to continue with his church family every week. Dr. John is survived by his wife of sixty eight years, Mary Nell Norwood Isbell, and their children Dr. Blake (Bonnie) Isbell, Dr. Steve (Merle) Isbell, and Nancy (Allen) Isbell Meisler, RN, MSN; nine grandchildren, six great grandchildren (he noted, “And three more by end of summer”); siblings Dr. Charles Isbell and Sara Isbell Quinn. His extended family also includes an incredible group of “Airport Buddies” who unfailingly supported him and treated him with the utmost respect, and employees of Isbell Medical Group who did the same, always with a smile. Due to COVID restrictions, a private service was held at Glenwood Cemetery on Sunday, May 17, 2020. Dr. R. Pat McFadden and Dr. Marshall Henderson officiated, with Dr. Roger Walworth playing "Taps" and singing with Isbell family members. Surprising the family, and as the American flag was lifted from his casket and being prepared for presentation, Dr. John was honored with a Missing Man Formation flyover, planned and executed by his local Airport Buddies. The Isbell family is committed to having a traditional memorial service once COVID restrictions are fully lifted. Donations may be made to First Baptist Church, 106 Grand Avenue NW, Fort Payne, 35967 or Mitchell’s Place, 4778 Overton Road, Birmingham, AL 35210.

Dr. John B. Isbell, 89, of Fort Payne died at his home Friday, May 15, 2020, with his family present. Born March 24, 1931, to John B. and Eleanor Gilbreath Isbell, he attended Fort Payne City School and was a graduate of DeKalb County High School... View Obituary & Service Information

The family of Dr. John B. Isbell created this Life Tributes page to make it easy to share your memories.

Send flowers to the Isbell family.