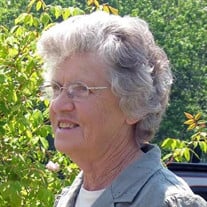 Louise Twilley, age 94 of the Lickskillet community, passed away Wednesday, November 18, 2020. She was born on November 8, 1926 to the late Grady & Dora Henderson Walker. She was a member of the old Bethel Church in Lickskillet, now known as... View Obituary & Service Information

The family of Louise Twilley created this Life Tributes page to make it easy to share your memories.

Louise Twilley, age 94 of the Lickskillet community, passed away...

Send flowers to the Twilley family.