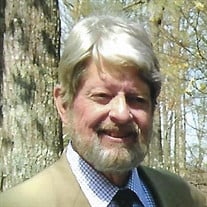 Alfred Richard Igou, 74, of Fort Payne, died Saturday, Nov. 24, 2018, in Fort Payne. Services will be Tuesday, Nov. 27, at 2 p.m. at Fort Payne First United Methodist Church with the Rev. Michael Miller officiating. Visitation will be Tuesday from noon until 2 p.m. at the church’s Christian Life Center. A private burial service will follow. He was preceded in death by his parents, Arlene and Dr. R.A. Igou, Jr. Survivors include his wife of 44 years, Deema Bailey Igou; children, Christy (Matt) Brandon, of Fort Payne, Anna (Scott) Shinabargar, of Rock Hill, S.C., Ellen (Andy) Hardy, of Birmingham, and Alex (Lauren) Igou, of Huntsville; and sisters, Susan Long, of Fort Payne, and Mary (Ben) Shurett, of Mentone; grandchildren, Margaret-Bailey Turner, of Bloomington, Ind., Lili Brandon and Susanna Brandon, both of Fort Payne; Benjamin and John Carden Shinabargar, both of Rock Hill, S.C., Levi Igou, of Huntsville, and Ben Hardy, of Birmingham. He was a devoted and loving husband, father and grandfather. His family and many friends will miss him greatly. Mr. Igou was a 1967 graduate of the University of Alabama and earned his Juris Doctor degree there in 1970. He also completed the Career Prosecutor Course at Bates College of Law at the University of Houston in 1974. Following graduation from law school, he returned to Fort Payne in 1971 and became an Assistant District Attorney. In 1976, he was appointed as the District Attorney to the 9th Judicial Circuit, which included DeKalb and Cherokee counties. He was elected without opposition for three terms, in 1980, 1986 and 1992. He retired in 1996 and served at District Attorney in a supernumerary status for the last 22 years, including serving as a contract attorney for the District Attorney’s office working with the Alabama Child Support Association. He served the Alabama District Attorney’s Association with distinction, serving in every leadership position and as president of the association. In lieu of flowers, the family requests donations to the American Cancer Society or to the Robert Purdy Sunday School Class, Fort Payne First United Methodist Church, 206 Grand Ave., NW, Fort Payne, AL, 35967. Funeral Services will be 2:00 pm Tuesday from the Fort Payne First United Methodist Church. The family will receive friends from 12: Noon Tuesday in the Life Center of First United Methodist Church till the hour of service. Private interment services will follow.

The family of Richard Igou created this Life Tributes page to make it easy to share your memories.

Send flowers to the Igou family.