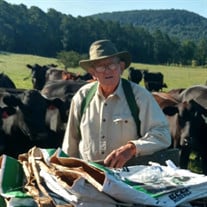 LTC ( R ) Roy Carl Smith, Sr., Ph.D. of Valley Head, AL, passed away the morning of July 19, 2020 surrounded by his family. Roy was born on October 17, 1928 to Gertrude Virginia (Hartline) and Carl Burnett Smith in Sulphur Springs, AL. He is preceded in death by his parents and his sister Betty Willis. He is survived by his wife Gwen Smith Ph.D. (Cornelius); his children, Roy C. Smith Jr. (Glenda Jones) and Patricia Leath (Glenn Leath); his grandchildren Dr. Roy C. Smith, III, DVM and Dr. Andrea Smith, Pharm.D. (Dr. Andrew Crowe, Pharm.D.); his great-grandchildren (Eleanor, Colette, & Annika Crowe); and two surviving sisters (Alice Smith Wheeler and Virginia Smith Mashburn). He attended Valley Head Schools and graduated in 1946. He earned his Bachelor’s degree in teaching from Jacksonville State, where he met his wife, Gwen Cornelius Smith. They were married in 1951 and have two children. Roy was drafted into the Army and served in Japan during the Korean War. His military career spanned from Korea to a commission in the National Guard. He rose to the rank of Lieutenant Colonel and commanded the 151st Engineer Battalion headquartered in Fort Payne, AL. Upon leaving active service, he started teaching in Rising Fawn, Ga. He later taught math and coached football at Valley Head High School. He moved to Northeast State Junior College as Dean of Students. From there, he attended the University of Alabama to complete his Ph.D. There, he worked at several positions, rising to become the registrar and supervising multiple departments. He was an NCAA certifying official and was part of the ACT Board. He retired from The University in 1995 to his farm in Valley Head where he raised cattle, participated in Masonic activities, and served on the Valley Head Water Board until his death. Graveside services will be at Sulphur Springs Cemetery on Wednesday, July 22, 2020 at 10 a.m. In lieu of flowers, the family requests memorial contributions be made to the Dr. Roy C. Smith, Sr. UA DeKalb Bama Club Memorial Scholarship Fund, c/o National Alumni Association Endowed Scholarship Program, PO Box 861928, Tuscaloosa, AL 35486, attn: Deborah Parr (*make checks payable to Alumni Fund and denote Dr. Roy C. Smith, Sr. on check).

The family of Roy Carl Smith, Sr. created this Life Tributes page to make it easy to share your memories.

Send flowers to the Smith, family.