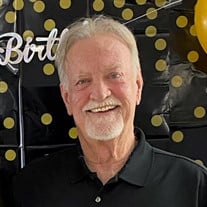 Terry Van Gravitt, 70, passed away Friday, September 24, 2021 surrounded by love, at his home in Fort Payne. Terry loved life, his family and God and was a life-long resident of Fort Payne. He was born on March 27, 1951 to Floyd Van and Azzie Lee Gravitt. Terry enjoyed spending time with his grandkids and watching Alabama football. Terry graduated from Fort Payne High School and afterwards worked with his father in his brick laying business and was taught the value of honesty and integrity in business and life. Expanding his horizons, Terry sold insurance for Metropolitan Insurance for several years and then continued using his salesman gifts and abilities to start a business selling novelties in Alabama and surrounding states. Terry was a true entrepreneur – he began a screen-printing business Darbo in December 1986. His hard work and loyalty to his customers helped him build a successful business which he continued until his stroke in April 2021. Terry was a perfectionist and his customers could always count on him for a top-quality job. His can-do spirit and never-give-up attitude was evident in everything he did. Terry had a strong faith in God and had a heart of gold, always willing to help anyone. Terry died a rich man – his good name and character and his four wonderful children and his four grandchildren were his greatest riches. Funeral services will be 1 p.m. Monday at Wilson Funeral Home with burial following in Glenwood Cemetery. The family will receive friends from 11 a.m. until the 1 p.m. hour of service. His spirit is carried on by his children Joey Gravitt and wife Jenny, Bridget Graham and husband Chris, Jonathon Gravitt, and Sonya Meeks and husband Matt. He also leaves behind his wife of 40 years Darlene Norton Gravitt; his mother Azzie Gravitt; sister Gwen Hill and husband David; grandchildren Joshua Gravitt and wife Adrean, Jayla Gravitt, Keelyn Graham, and Breca Graham; and great-grandson Jay Carter Van Gravitt coming in March. He is preceded in death by his father Floyd Gravitt.

Terry Van Gravitt, 70, passed away Friday, September 24, 2021 surrounded by love, at his home in Fort Payne. Terry loved life, his family and God and was a life-long resident of Fort Payne. He was born on March 27, 1951 to Floyd Van and Azzie... View Obituary & Service Information

The family of Terry Van Gravitt created this Life Tributes page to make it easy to share your memories.

Send flowers to the Gravitt family.