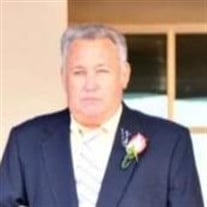 William Guy “Squeak” Smith, 78, of Mentone, Alabama went to be with the Lord on Sunday, November 10, 2019 while at his home. Born on March 23, 1941 and raised in Mentone, Alabama to parents John Paul Smith and Nettie Jane Crow Smith. He and his family descended from the Mayflower Pilgrims and other New England families that first moved from Massachusetts to the Mentone area around 1840. He was known by most as “Squeak”, a nickname given to him as an infant by his sister, Dorothy. Squeak loved his Lord and Savior Jesus Christ, and was a lifelong, devoted member of Mentone Church of God of Prophecy which he had attended since birth. He also attended Moon Lake School in Mentone. Squeak spent his entire adult life working in sales. As a young man he worked for Erby C. Harris as an automobile salesman at Harris Motors in Fort Payne and completed Chrysler Automotive Sales School. He later worked for William Blackburn at Mentone Superette before joining the mobile home industry working first with Pioneer Homes in Fort Payne and then Sunset Mobile Homes. He worked 48 years with Paul Green at Sunset Homes and was involved in placing countless individuals and families in homes. Some of his fondest hobbies included fishing, working on vehicles, and getting to spend time with his family. He was a proud, loving husband, father, grandfather, and great-grandfather to his six children, nineteen grandchildren, and fourteen great-grandchildren. Survived by his wife of almost 53 years, Judy Hasting Smith; daughters, Crystal and Ray Poteat, Nicole and Josh Goldsmith; sons, Stacy and Karen Smith, Shan Smith and Heather Sandusky, Whitney and Crystal Smith, and Chad and Amber Smith; brother, John Paul Smith, Jr.; and his special pet Corgi, Sophie. He is preceded in death by his parents; sisters, Levona Cooper, Dorothy Gray, Catherine Henley, and Geraldine Ellis; and brother, Ernest Smith. Funeral services will be 2 p.m. Thursday at Wilson Funeral Home with his eulogy given by two of his sons, Whitney and Chad, both local ministers. Burial will follow in Bankhead Cemetery. The family will receive friends Wednesday from 5 until 8 p.m. at the funeral home.

The family of William (Squeak) Guy Smith created this Life Tributes page to make it easy to share your memories.

Send flowers to the Smith family.